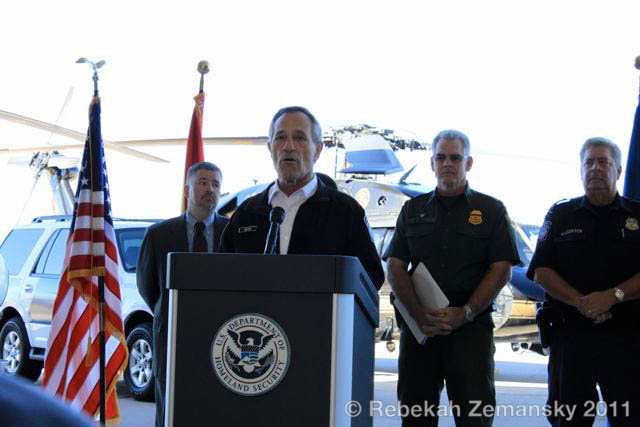 Starting this month, I’m forwarding missing persons reports submitted to Missing from Mexico (through the blog and / or social media) directly to Colibri Center for Human Rights. They also take reports directly here.

Starting this month, I’m forwarding missing persons reports submitted to Missing from Mexico (through the blog and / or social media) directly to Colibri Center for Human Rights. They also take reports directly here. Also this fall is bringing several new projects. I’m excited about them and hope to share more about them here in the future. In the meantime, Missing from Mexico will be going on indefinite hiatus.

In concert: in the house and behind the scenes of a cross-border musical event

As spectators began to take seats, all sorts of uniformed personnel and law enforcement whizzed through the walkways between photographers and reporters. Lights dimmed down in the college auditorium, the United States Customs and Border Protection (CBP) Honor Guard marched in solemnly across the stage. They presented the many flags hanging from staffs which they posted on both sides of Mexico’s Federal Police woodwind symphony, who sat in arched rows spread across the stage at the base of the auditorium, a performing arts theatre which now sat about one hundred uniformed personnel. Mexico, the United States, the Department of Homeland Security, CBP, and the state of Arizona all had representative colors which stood hanging for the entirety of the concert. This colorful array of flags seemed a reminder of the occasion, which brought real connective space and action between groups that often find themselves divided, misinformed or just a bit unfamiliar with one another.

I’m excited to present Brian’s final project 2016 internship project! Here is a sample of 2016 U.S. presidential election draws attention on both sides of the border – watch below, then click through to see the all the interviews and the full set of posts. The DREAMer Moms of Tijuana and their mission / Las Madres Soñadoras de Tijuana y su misión

In 2014 alone the U.S. and Mexico totaled over $534 billion in bilateral commerce, according to the U.S. Census Bureau.  With well over $1 billion traveling across our southern border every day, 70 percent of that crosses via trucks, which means longer wait times at ports of entry is directly impacting our economy. It is estimated that the U.S. economy loses $116 million for every minute of delay at the five busiest ports of entry on the southern border. In 2008, that added up to a loss of $6 billion and 26,000 jobs according to then-Secretary of Homeland Security Janet Napolitano. A report examining the state of the border by Erik Lee and Christopher Wilson breaks it down like this: the infrastructure and capacity of ports of entry on the U.S. Mexico border has not kept up with the expansion and steady growth of trade on both sides.

To win the democratic nomination 2383 delegates are needed. As of this morning, Hilary Clinton has 2184 pledged delegates to Sanders 1804; with superdelegates she has 2755 to Sanders 1852. While Donald trump is campaigning to enforce border security and deport the 11 million illegal immigrants living in the United States, Hillary Clinton’s immigration reform proposal during the 2016 presidential election could be explained as the polar opposite of Trump’s proposal. Clinton ran in the 2008 Democratic Party presidential primary election for president of the United States campaigning strongly on jobs and raising the minimum wage. During her second campaign in the 2016 presidential election, she finds herself pitted against Donald Trump’s massive deportation plan and Bernie Sanders’s democratic socialist plans to raise the minimum wage to $15.00 nationally.

Bernie Sanders’ immigration reform plan also heavily focuses on the expansion of President Obama’s DACA and DAPA programs and the use of executive actions. In his immigration plan, he outlines his plans to enforce immigration and border security, dismantle for-profit and family detention programs and create a pathway for citizenship. Sanders blames Mexico’s poor economy and waves of immigrants on the North American Free Trade Agreement (NAFTA), even though the Office of the United States Trade Representative states that 30 states report Canada or Mexico as their first or second largest export markets and U.S. manufacturing exports have increased 258% since implemented in 1994. Even the Republican Party frontrunner Donald Trump is against NAFTA. In October of 2015, CBS News reported on the effects of NAFTA.

Donald Trump’s plans for illegal immigrants during the 2016 presidential elections may be the most aggressive position of any of the candidates. But just how much of his plans for illegal immigrants and his allegations against them are based on facts? The New York City businessman outlines his immigration reform strategy much like a business plan, listing the three core principles of “real immigration reform” and detailing his three-part plan. His three core beliefs, according to his campaign site, are:

Trump officially announced his bid for the Republican nomination for President of the United States in Las Vegas, Nev., on June 16, 2015, by immediately taking a strong stance on immigration control, illegal migration from Mexico and suggesting hardliner plans for illegal immigrants. While the media have been reporting what they deem as radical and racist sentiments from Trump toward Mexicans and other immigrants, like calling them drug traffickers, criminals and rapists, Trump’s campaign page cites his allegations to credible news sources.

Immigration today in the United States

To understand and discuss current proposals and ideas regarding immigration today in the United States and the reform thereof, factual information must be used to argue cases for and against said proposals. While the effects of both legal and illegal immigration can be studied various ways and the details skewered to represent one point of view or another, it would be more reasonable to evaluate the arguments against immigration. The most-apparent misconceptions are that all Hispanics are immigrants, they all immigrated illegally, they all are Mexican and they can’t speak English. The Migration Policy Institute lists the following statistics about immigrants in the United States:
– Approximately 316 million people lived in the United States in 2013. – Of those, approximately 41.3 million, or 13%, were immigrants.

Immigration in the 2016 Election

“Give me your tired, your poor, Your huddled masses yearning to breathe free, The wretched refuse of your teeming shore. Send these, the homeless, tempest-tossed to me, I lift my lamp beside the golden door!” This has been our nation’s promise to countless numbers of immigrants arriving at Ellis Island and the United States in general from the world over since 1886. However, even as a nation of immigrants created for the freedom and safe-haven of other immigrants, we have polarized our beliefs about who should be here, how to manage their intake and what language they should speak as well as who should not be here and how to keep them out. As a result, the 2016 presidential election and party primary candidates have a tremendous focus on immigration and border security, with GOP front-runner and Washington outsider Donald J. Trump proposing to build a border wall, make Mexico pay for it and deport all illegal immigrants currently in the United States.

Please add widgets to this content area in the WordPress admin area under appearance > widgets.