Donald Trump’s plans for illegal immigrants during the 2016 presidential elections may be the most aggressive position of any of the candidates.

But just how much of his plans for illegal immigrants and his allegations against them are based on facts?

His three core beliefs, according to his campaign site, are:

Trump officially announced his bid for the Republican nomination for President of the United States in Las Vegas, Nev., on June 16, 2015, by immediately taking a strong stance on immigration control, illegal migration from Mexico and suggesting hardliner plans for illegal immigrants.

While the media have been reporting what they deem as radical and racist sentiments from Trump toward Mexicans and other immigrants, like calling them drug traffickers, criminals and rapists, Trump’s campaign page cites his allegations to credible news sources.

During the speech in Las Vegas, Trump said illegal Mexican immigrants are “bringing drugs, they’re bringing crime, they’re rapists and some, I assume, are good people.”

The official definition of criminal aliens, according to the report itself and not Breitbart’s slanted interpretation, is “non-citizens convicted of crimes while in this country legally or illegally.”

Legal immigrants are those having a permanent resident status (aka a “green card”) or having a work visa or any other visa allowing them to be in the United States.

Although residency is referred to as a permanent resident status, it must be renewed every 10 years.

While the statistics regarding criminal aliens may be alarming, there is no proof that the drug, sexual, assault, theft or homicide charges are committed by Mexicans or even illegal immigrants, whether they are Mexican or of any other nationality.

Not even Breitbart could make a connection based on the report. 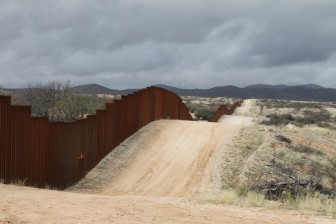 But somehow Trump managed to use these general statistics to support his plans for illegal immigrants and to build a wall on the U.S./Mexico border and make Mexico pay for it.

The need to build a wall to stop illegal immigration is even less necessary today as the number of illegal Mexican immigrants apprehended by U.S. Border Patrol dropped from 1.6 million in 2000 to 229,178 in 2014.

One is only left to speculate how many of these children were bringing drugs, sexual violence and disease, as Trump continues to argue that the United States is becoming “a dumping ground… for many other parts of the world.”

In September of 2015, Trump stated that he can deport all of the 11 million illegal immigrants in just 18-24 months, while experts speculate it would take nearly 20 years and cost more than $600 billion.

In February of 2016, CNN reported that experts verified a 1,954-mile border wall can be constructed from 339 million cubic feet of precast concrete panels and 5 billion pounds of steel, making the wall 20 feet high, 5 feet deep, 10 feet wide and 8 inches thick, costing about $10.5 billion to construct in four years.

In April of 2016, Trump revealed his plan to The Washington Post of how to make Mexico build the wall: Use the USA Patriot Act anti-terrorism law to stop remittances sent to Mexico and other countries by illegal immigrants unless Mexico makes “a one-time payment of $5-10 billion.”

But as already noted, the wall will cost approximately $10.5 billion, so it seems odd that a master negotiator and businessman such as Trump would allow Mexico to haggle him for a payment of less than half of the total cost of the wall.

His memo also claimed that Mexico receives nearly $25 billion a year in remittances, mostly from illegal immigrants living in the United States.

Actually, The Washington Post shows that money comes from all over the world, not just from the United States.

There is also no way to prove whether or not these payments come from the 5.6 million illegal or the 6.1 million legal Mexican immigrants living in the United States, as reported in 2014.

Moving on to Trump’s second objective: “Defend the Laws and Constitution of the United States.”

Trump plans to triple the number of U.S. Department of Homeland Security Immigration and Customs Enforcement, or ICE, agents.

He also quotes the President of the ICE Officers’ Council’s Congressional testimony claiming that there are only 5,000 ICE officers covering the 50 states.

If their three missions are immigration enforcement, investigating illegal movement of people and goods and preventing terrorism, why would the U.S. need three times that amount overseas and how would Trump ensure that those new agents would be in the U.S. to enforce his massive 11 million-person deportation plan?

Trump plans to fund this increase by ending the payment of tax credits to illegal immigrants living in the United States.

Illegal immigrants are eligible to receive an Individual Taxpayer Identification Number because even illegally earned income is still taxable by the Internal Revue Service.

The ITIN does not make a person eligible to receive Social Security benefits or the Earned Income Tax Credit, according to a Treasury Inspector General for Tax Administration report (TIFTA)and is deactivated by the IRS if a tax return has not been filed during a five-year period.

However, the report explains that taxpayers with an ITIN can file a refundable Additional Child Tax Credit (ACTC).

The Additional Child Tax Credit “provides a tax credit of up to $1,000 per child under the age of 17”, but has modifications depending on a taxpayer’s income bracket, taxes owed and total number of children.

According to the TIGTA report, the IRS paid $28.3 billion in ACTC refunds to 2.3 million taxpayers in 2010, and paid $4.2 billion in refunds to ITIN holders, with the average ITIN holder receiving $1,800.

In addition, the report explains that the ACTC can be claimed for three tax years all at once. As a result, 9,000 taxpayers claimed $10,000 each for filing three claims at the same time (the report does not verify if these taxpayers are ITIN holders or U.S. citizens filing ACTC claims).

Lastly, the report shows that the IRS does not demand ITIN holders filing ACTC refunds to verify the children being claimed even reside in the United States.

The United States Government Accountability Office reported that the IRS prevented or recovered an estimated $24.2 billion in fraudulent, identity theft-related refunds in 2013, but additionally paid $5.8 billion in cases that were later found to be fraudulent.

However, the report does not connect these cases of fraud with ITIN holders, so it is not possible to determine how much is spent in fraudulent refunds to illegal immigrants nor how much would be saved by ending ITIN holder tax credits.

The TIGTA also called for changes to the ITIN program due to fraudulent tax claims.

According to the report, $9,007,186 in tax refunds was issued to ITIN applicants using only seven addresses.

Yet, ICE currently has 20,000 agents with their $6 billion budget, with 5,000 supposedly working in the United States and the rest working in offices overseas.

If their three missions are immigration enforcement, investigating illegal movement of people and goods and preventing terrorism, why would the U.S. need three times that amount overseas and how would Trump ensure that those new agents would be in the U.S. to enforce his massive 11 million-person deportation plan?

“Defend the Laws and Constitution of the United States.”

Trump’s campaign site claims, “The Second Amendment to our Constitution is clear. The right of the people to keep and bear Arms shall not be infringed. Period.”

While it would appear that Trump is, indeed, taking a strong position to protect constitutional rights, he also wants to end birthright citizenship.

However, birthright citizenship was ratified as the Fourteenth Amendment of the Constitution of the United States in 1868, overturning the historic Dred Scott case where the Supreme Court ruled that former slaves born in the United States were not U.S. citizens.

However, subsidy and welfare programs have caused many to take a second look at the amendment.

For example, in 2009 the Center for Immigration Studies found that 71 percent of illegal immigrant households with children used at least one welfare program, being eligible to receive benefits due to their U.S.-born child/children.

In October of 2015, he called out Facebook’s Mark Zuckerberg for calling for an increase of H-1B visa-holding foreign workers.

Workpermit.com describes the U.S. H-1B as “a non-immigrant visa that allows US companies to employ foreign workers in specialty occupations that require theoretical or technical expertise in specialized fields such as in architecture, engineering, mathematics, science, and medicine.”

According to CNN, H-1B employees are often paid 20%-45% less than U.S. workers and 74% of those holding a bachelor’s degree in a science, technology, engineering and mathematics fields work in jobs outside of those fields.

However, The New York Times reported in February of 2016 that Trump’s Mar-a-Lago resort has pursued more than 500 visas for immigrant workers while turning down more than 300 local and qualified applicants.

While Trump may be taking a partisan stance on key issues regarding immigration and federal government programs that aid illegal immigrants, he addresses important issues such as a broken IRS system and a citizenship loophole that is allowing entitlements to those who would not normally receive those entitlements by law.

While more liberal policies, such as President Barack Obama’s amnesty plan, seek to allow paths to citizenship and work opportunities for those already here illegally, Trump takes a more no-holds-barred stance about immigration and border security by proposing to deport all illegal immigrants living in the United States, stopping tax credits for unauthorized workers and birthright citizen for their children, building a wall at the U.S./Mexico border and tripling the number of ICE agents.

Although residency is referred to as a permanent resident status, it must be renewed every 10 years.