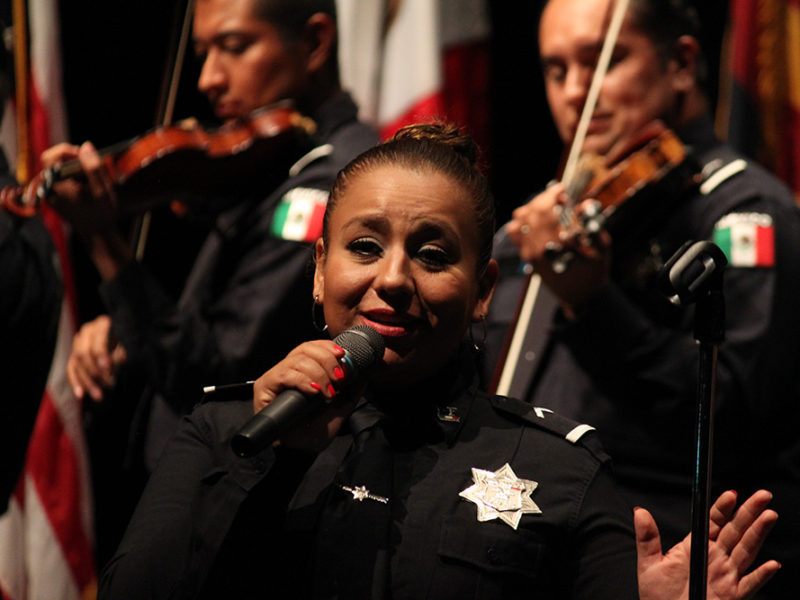 As spectators began to take seats, all sorts of uniformed personnel and law enforcement whizzed through the walkways between photographers and reporters. Lights dimmed down in the college auditorium, the United States Customs and Border Protection (CBP) Honor Guard marched in solemnly across the stage. They presented the many flags hanging from staffs which they posted on both sides of Mexico’s Federal Police woodwind symphony, who sat in arched rows spread across the stage at the base of the auditorium, a performing arts theatre which now sat about one hundred uniformed personnel. Mexico, the United States, the Department of Homeland Security, CBP, and the state of Arizona all had representative colors which stood hanging for the entirety of the concert. This colorful array of flags seemed a reminder of the occasion, which brought real connective space and action between groups that often find themselves divided, misinformed or just a bit unfamiliar with one another. 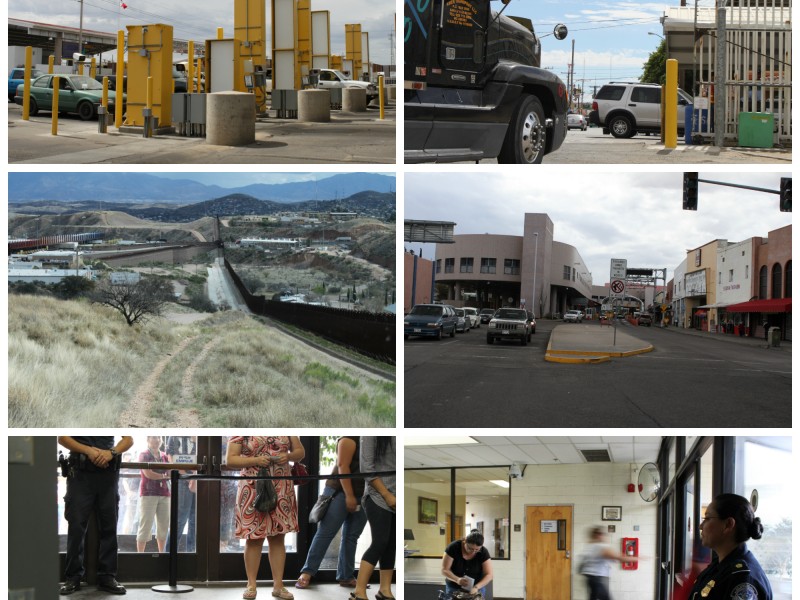 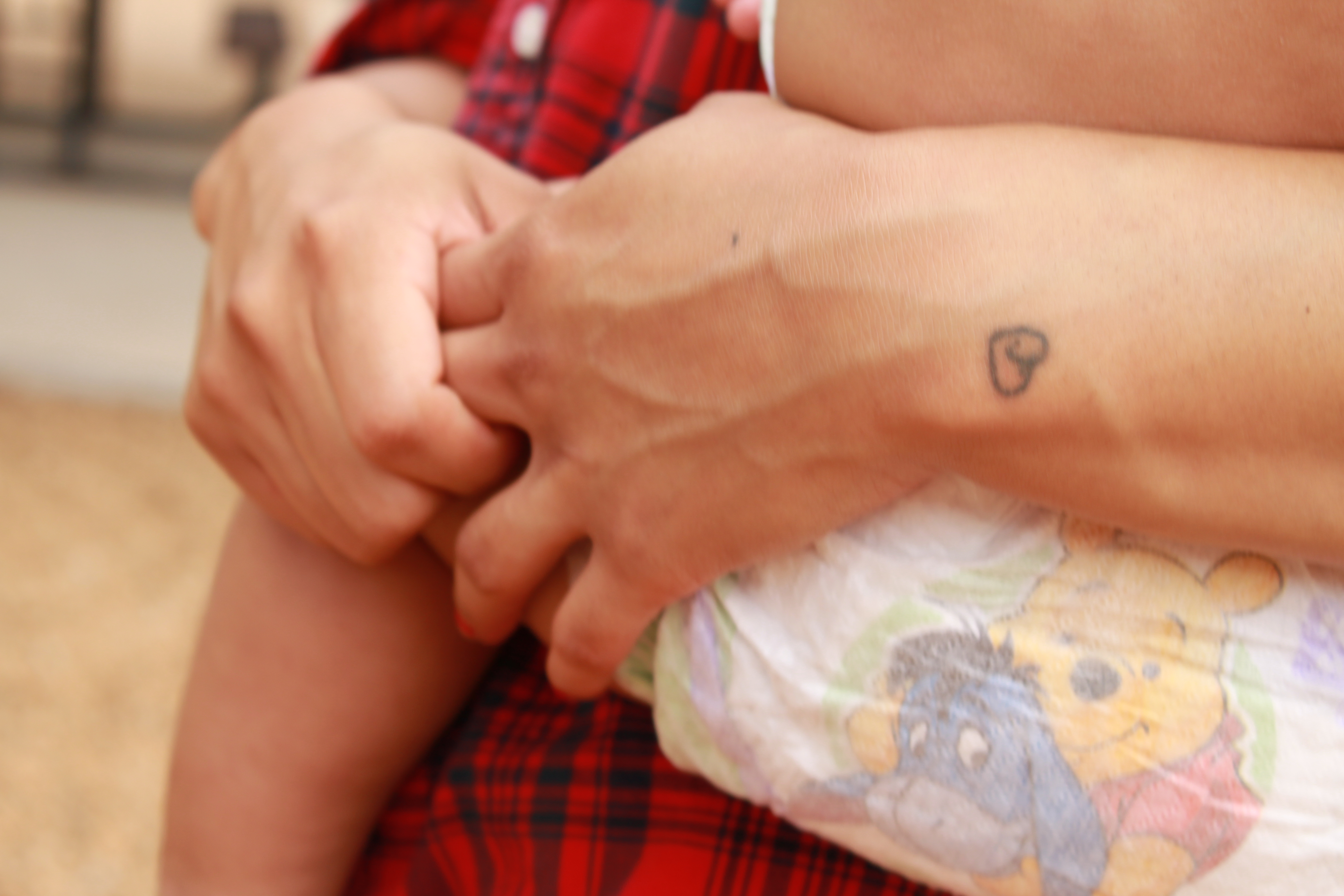 “It’s gonna be a tough week or two,” Robin said. “I just can’t believe it’s been two years.” Two years ago – that’s how long Robin has been trying to find out what happened to her coworker-turned-friend-turned-sister. Maria Dorantes, better known to her friends and family as Chayo, was last heard from on February 25, 2011. Family had made arrangements with a smuggler to help her cross the U.S.-Mexico border in the next few days.

Stirred up and shut down: what it’s like to cover protests

Protests, rallies, marches – they’re all different ways of describing a big public event with passionate people. And that means a big, loud, exciting mix of challenges and opportunities for reporters trying to cover what’s going on. Sometimes there’s also the people who disagree so strongly they’ll come out and counter protest. This can be a great way to get a mix of viewpoints – or to get caught between two groups shouting. As my professor for 20th century media and entrepreneurship (real class) says, someone yelling from one side and someone yelling from the other side doesn’t make balanced reporting, it makes two people yelling at each other.

This post contains extra reading material, articles and other resources, related to recent blog posts including Planning for the unexpected: community advocates urge immigrants to prepare for raids and Faith and Phoenix: Convening in Arizona after SB1070 (a series about how faith based groups with national conventions scheduled in Phoenix responded to Arizona’s image crises during and after the passage of SB 1070. Check out Part 1 and Part 2 for the full story.)

• Arpaio Fires Up Hispanic-Hunting Raids, Going After the Smallest Fish He Can Find – Phoenix New Times on 25 July 2013

• Melendres vs. Arpaio Decision – Judge Murray Snow via Fronteras Desk on 24 May 2013

Both of Katherine Figueroa’s parents were working at the same Peoria car wash when it was raided in October 2009.

Faith and Phoenix: Convening in Arizona after SB1070, Part 2

These are articles and resources related to Faith and Phoenix: Convening in Arizona after SB1070, a series about how faith based groups with national conventions scheduled in Phoenix responded to Arizona’s image crises during and after the passage of SB 1070; check out Part 1 here. “I personally was of the opinion that it was a real opportunity for us to shed light on the issue nationally by going,” said Unitarian Universalist President Peter Morales. He told the local congregations and advocacy groups, “I need for you to invite us; that will break the boycott.” And they did, allowing the 2012 Unitarian Universalist Association of Congregations convention to take place from June 20 to June 24. “That’s what made the whole thing work because of what we did because it was clearly the most effective public witness we’ve ever done was on this issue, that we committed to working in close partnership with local people.

Faith and Phoenix: Convening in Arizona after SB1070, Part 1

This is the first part of Faith and Phoenix: Convening in Arizona after SB1070, a series about how faith based groups with national conventions scheduled in Phoenix responded to Arizona’s image crises during and after the passage of SB 1070; check out Part 2 here. Several years ago when the largest Anabaptist organization in the U.S. picked Phoenix for the location of its biannual conference in 2013, they didn’t anticipate that the state would be a hotspot for national debates on immigration and border issues – or that they’d be attempting to produce a denominational statement about immigration there. Yet, Arizona’s attractions as a tourist and convention destination seemed smashed when the 2010 passage of a controversial immigration bill, SB 1070, sparked intense national debates including issues border violence and racism in the state. Local community advocate James Garcia, who works with Promise Arizona, said that the news coverage affected everybody’s perceptions, whether they supported the SB 1070 bill or not. “Suddenly 24-hour news channels for six months straight, all they hear about is the words coming out of the mouth of the governor and Russell Pearce which claimed that the state is being overrun by words of immigrants and everybody is somehow physically endangered,” Garcia said.”So that negative representation was stamped into the brains of America and brains of America include all the people who are part of these conventions.”

Planning for the unexpected: community advocates urge immigrants to prepare for raids

Uncertain future for detained #Dream9: an example of sourcing the story

(a post discussing sourcing with examples from backgrounding work I did on The New York Times July 23 piece 9 in Deportation Protest Are Held in Bid to Re-enter U.S.)

This week on Tuesday, I got invited to help locate sources and gather background information for a brief follow-up story that Julia Preston was working on. A big part of reporting is reaching sources – and this becomes doubly high pressure when working on a breaking news or developing story. The day before, nine protesters were intentionally apprehended in Nogales on Monday morning. In press releases sent out before the event, protest organizers said that eight young immigrants who’d grown up in the U.S. but then had either voluntarily left or been deported would be protesting family separation (a ninth person joined the initial eight during the protest). They’d try to cross the U.S.-Mexico border at Morley Gate, a pedestrian crossing between Nogales, Sonora and Nogales, Arizona and request humanitarian parole.

Need a place to start research or just want to learn more about border issues? Missing from Mexico’s database of articles, radio pieces, video and official reports about border issues, forensics and reporting is now over 1000 entries – and growing! Plus don’t forget – if you see something that should be in here, article submissions welcome here.

It’s been awhile since I’ve heard from Eddie. His latest call, just before the end of March, is unexpected but follow-up on my part is probably overdue. There’s no new information about Andy. Instead Eddie has called to give me report numbers. Eddie’s wife has filed a missing persons report with NAMUS, a national missing persons database.

Faces in the News: what they tell us about reporting and about the border

You may be wondering why I’m spending so much time to tell you about individual stories like Eddie and Andy. Since I expect personal stories to come up a lot here, let’s go ahead and talk about it. Journalism is strongest when it tells about an issue or event through people. People who were there, people who made it happen, people who were affected – their information, stories, images and voices are known in academic research as primary sources. A reporter who ties stories together and shows you the people they met creates a much more engaging experience than one who sits in front of you and tells you about the people that he, and he alone, spoke with.