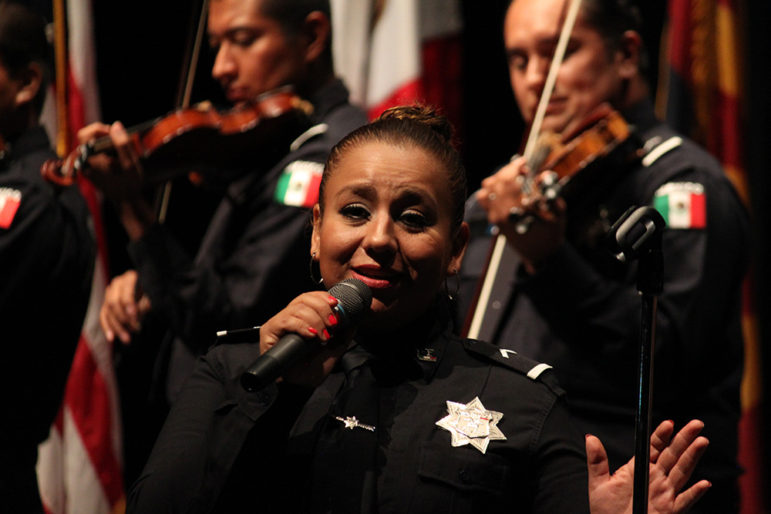 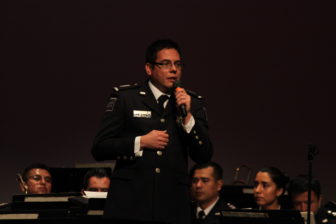 As spectators began to take seats, all sorts of uniformed personnel and law enforcement whizzed through the walkways between photographers and reporters.

Lights dimmed down in the college auditorium, the United States Customs and Border Protection (CBP) Honor Guard marched in solemnly across the stage. They presented the many flags hanging from staffs which they posted on both sides of Mexico’s Federal Police woodwind symphony, who sat in arched rows spread across the stage at the base of the auditorium, a performing arts theatre which now sat about one hundred uniformed personnel. Mexico, the United States, the Department of Homeland Security, CBP, and the state of Arizona all had representative colors which stood hanging for the entirety of the concert. This colorful array of flags seemed a reminder of the occasion, which brought real connective space and action between groups that often find themselves divided, misinformed or just a bit unfamiliar with one another. 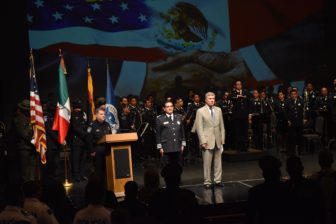 They held the flags up in position while the U.S. Commissioner of CBP and and the Mexico’s Deputy Commissioner of the Federal Police stood side by side, both placing their hands over their hearts in ceremony for their respective national anthems while everyone stood in respect. The U.S. anthem was sung aloud by a member of CBP. After the Honor Guard raised the flags, the symphony’s conductor Enrique, wearing a stolid, determined expression, marched briskly out to conduct the Mexican national anthem.

Later he stood firmly on the podium and, smiling, said “Mr. Commissioner, it’s a great honor for us that you could conduct for us…” and handed the conducting baton to U.S. Commissioner of Customs and Border Protection R. Gil Kerlikowske, who took the podium and prepared to conduct the introduction to the symphony’s first song.

“Most of you know that at the end of the year I will leave office, I’m looking for a new job” Kerlikowske said into the microphone as everyone laughed “I think I’m going to give this a try.”

Then Enrique took over again for the rest of the song with his warm, inviting personality which seemed to bring the many performers and listeners together, and in conducting he moved with a heartfelt, tenacious energy which pulsed through his whole body, but mostly into his right arm.

Commissioner Kerlikowske sat back in a stiff chair on the low mezzanine along the wall of the auditorium with a few government personnel nearby and he watched the band, appearing to enjoy the music while commenting occasionally to a nearby assistant. 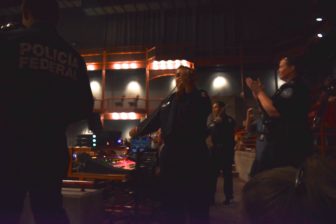 Enrique the director mentioned another surprise to come, simply saying “you’ll see” before the next song started. During that song, suddenly another group joined in as they walked casually in lines through both sides of the hall in the rear of the theater (where reporters stood and watched the performance from afar) and the new group continued down the aisles while strumming guitars, ringing trumpets and singing in chorus with the symphony on the stage below. It was the Federal Police Mariachi band, and they came with an incredible passion and intensity crying out in their voices. The men sung deeply and loudly with such an audible heartache that broke all language barriers.

Those in the seats of the auditorium came from all over: rangers from the national parks in the deserts nearby, U.S. Customs and Border Protection officers, and Mexican Federal Police officers. Around the room, people in different uniforms were saying hello for the first time, asking questions and taking interest in each other’s lives.

Aimed solely at building strong border communities, this was part of a series of events and an ongoing effort which focuses on increased collaboration between different government agencies, especially CBP and the Mexican Federal Police.

These events are a result of as well as a benefactor to a change in culture between CBP and Mexico – a change that Kerlikowske said has been building since about 5 years ago, when U.S. and Mexican governments were barely talking to each other. 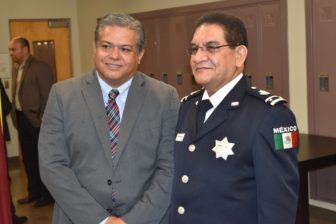 After the performance, Mexican Federal Police Deputy Commissioner Damián Canales sat alert in a brightly lit backstage room and smiled reassuringly while he listened and carefully watched the different characters sitting around him. He spoke positively of the band’s involvement with Mexico’s Federal Police and the nation’s people.

Although crime prevention and cooperation between governments is not perfect, Canales says it has certainly come a long way. “The relationship between the U.S. and Mexico is at its best in history,” Canales told reporters after the event “And that trickles down as a pyramid to the lower offices that the relationship is strong and that they continue to work together.”

Canales also spoke of growing cooperation and understanding between nations, and cited that President Obama and President Enrique Peña Nieto now publicly address each other by their first names, concluding that that these kinds of examples set by strong leadership have made a difference.

After the performance, the uniformed spectators and performers walked toward marked and unmarked vehicles in the parking lot of Pima Community College Center for the Arts. An armored personnel machine from Mexico’s federal police, several Border Protection and police cruisers, rural squad trucks and buses waited for these men and women, many of them to perform and attend future productions.

“You would think that it’s too much work to do this but the positive results have been very very beneficial for them,” Canales said of the sheer manpower and logistics needed for these binational events. “The federal police have many challenges and the mere fact is that officers put their lives on the line to protect the communities and that this is great way to introduce the officers and show their gratitude.” He said these types of activities with the orchestra are very well received and have linked the communities with law enforcement.

At the Tucson International Airport, a large navy blue Boeing 727 bearing the name and logo of “Policía Federal” waited alone in a barren corner of the private runway. The band members and crew, with sweat on their brows but smiling faces, carried bags up the stairs outside and into the aisle. Their next U.S. performance is in San Diego, where the cooler weather will be closer to what these men and women are accustomed to. Canales and his administrative colleagues boarded last when suddenly everything was all packed up, the jet whirled up its engines, pushed forward and carried everyone off into the gray sky toward their next engagement. 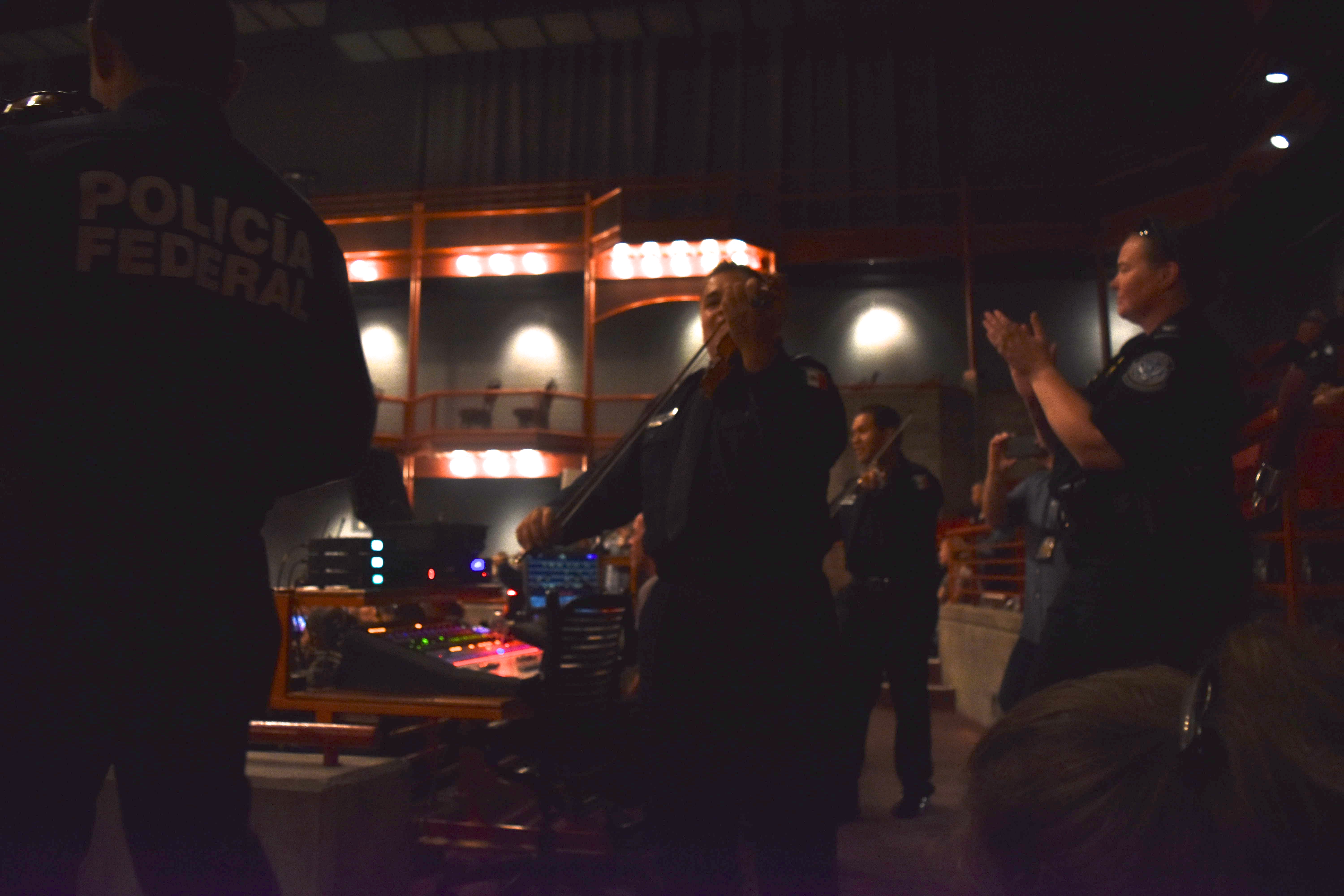 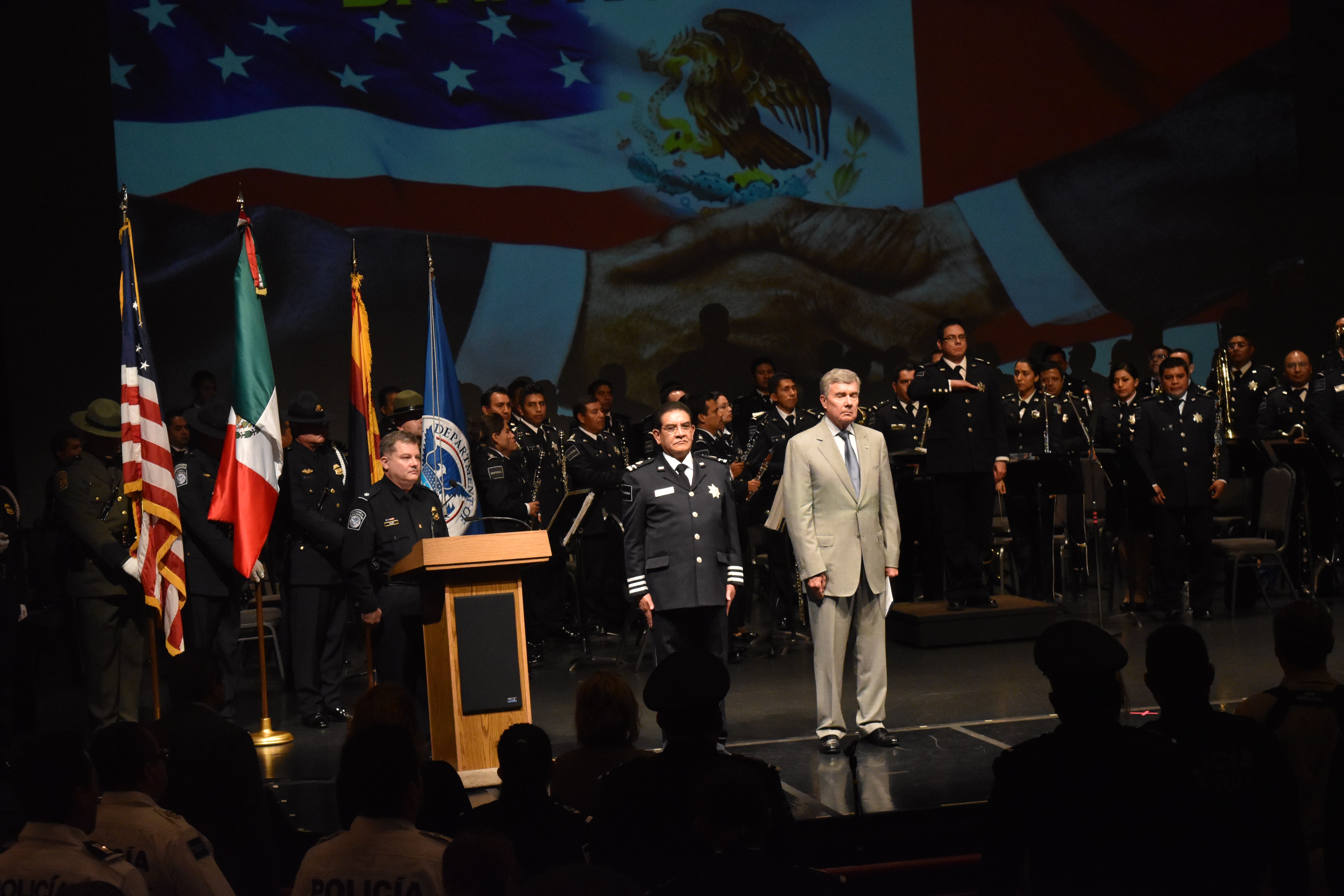 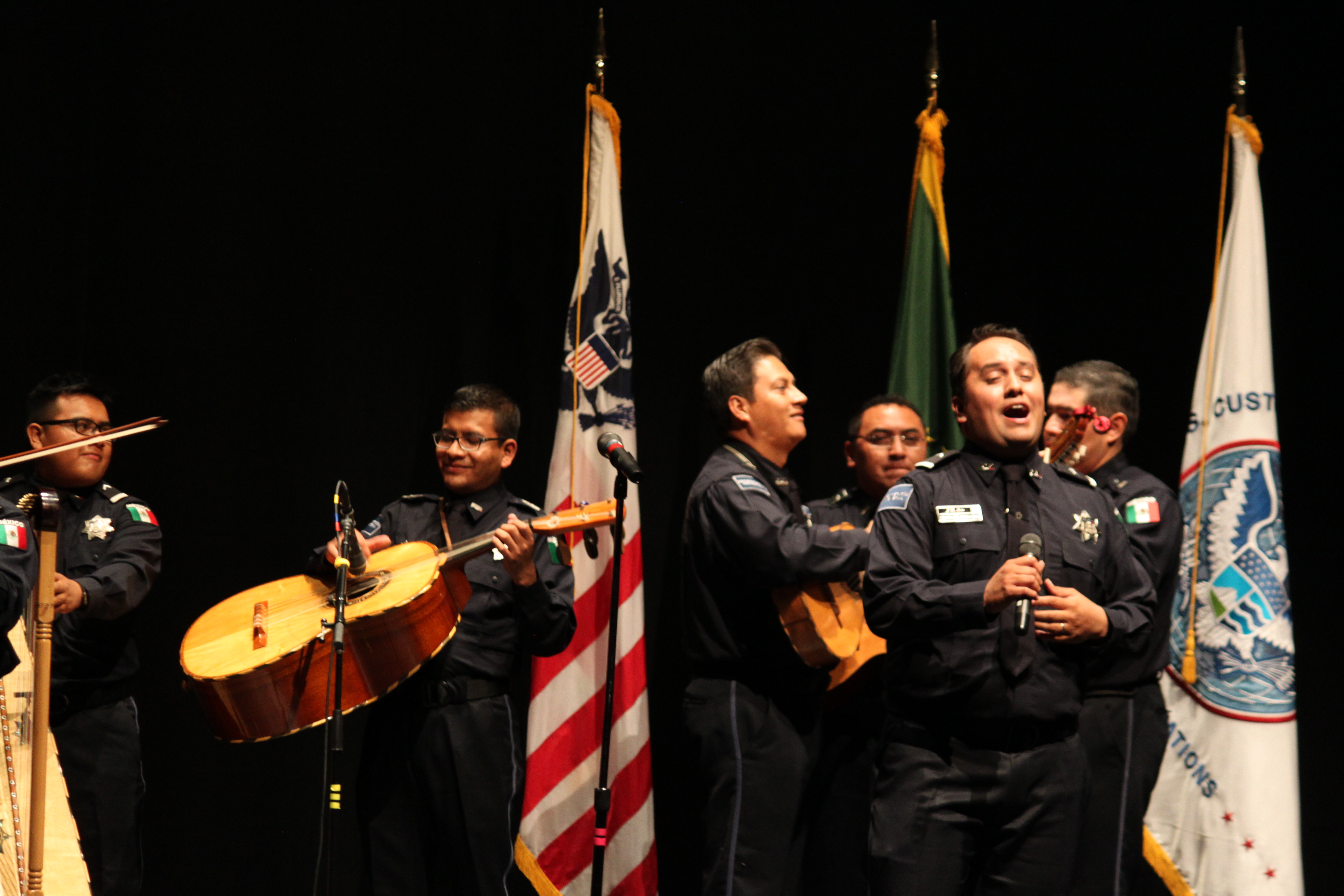 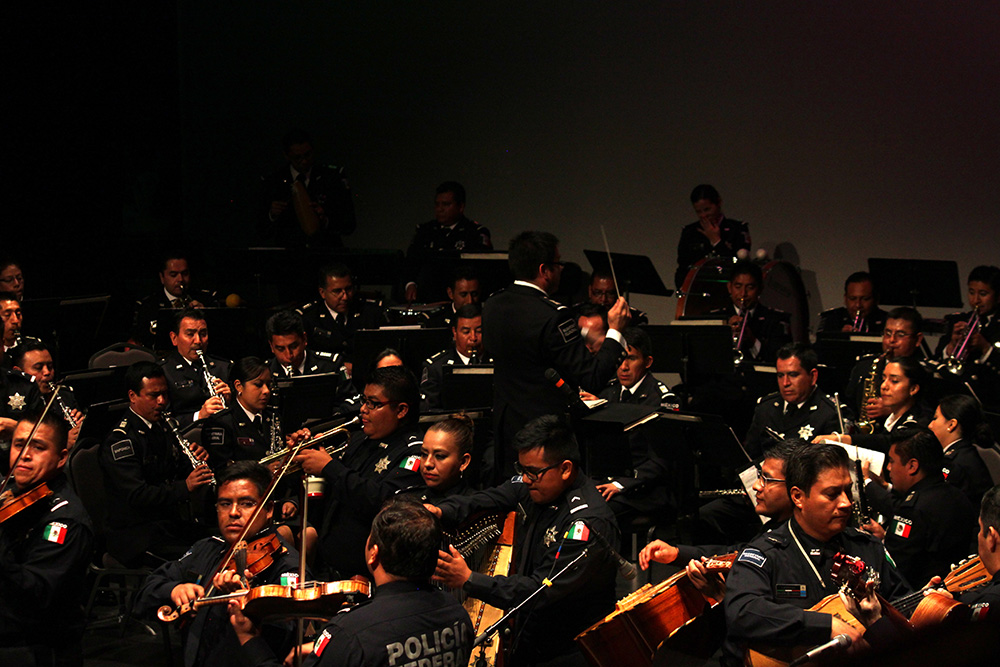 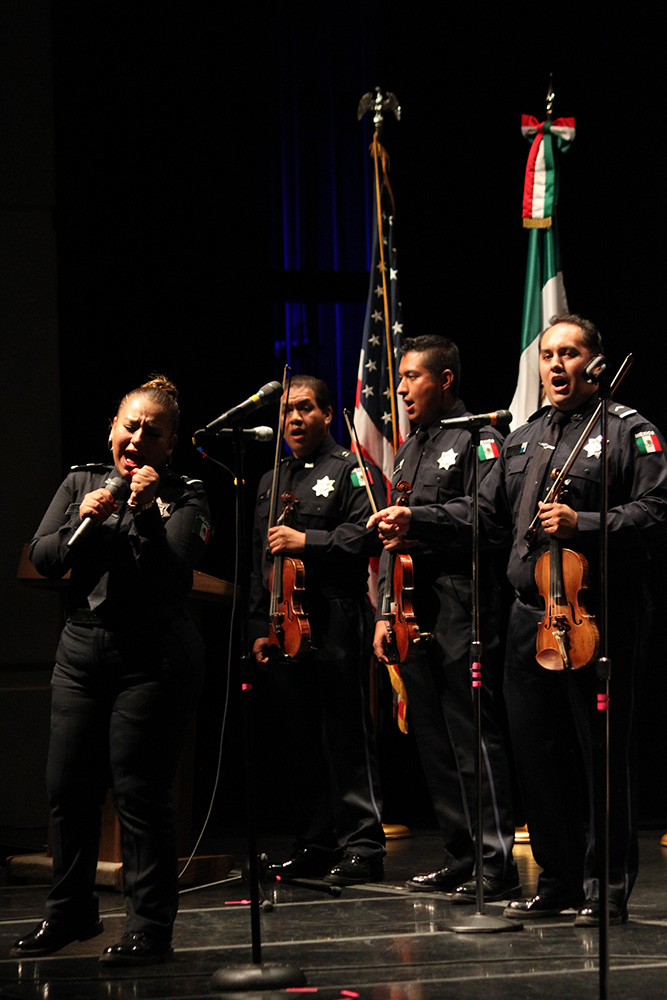 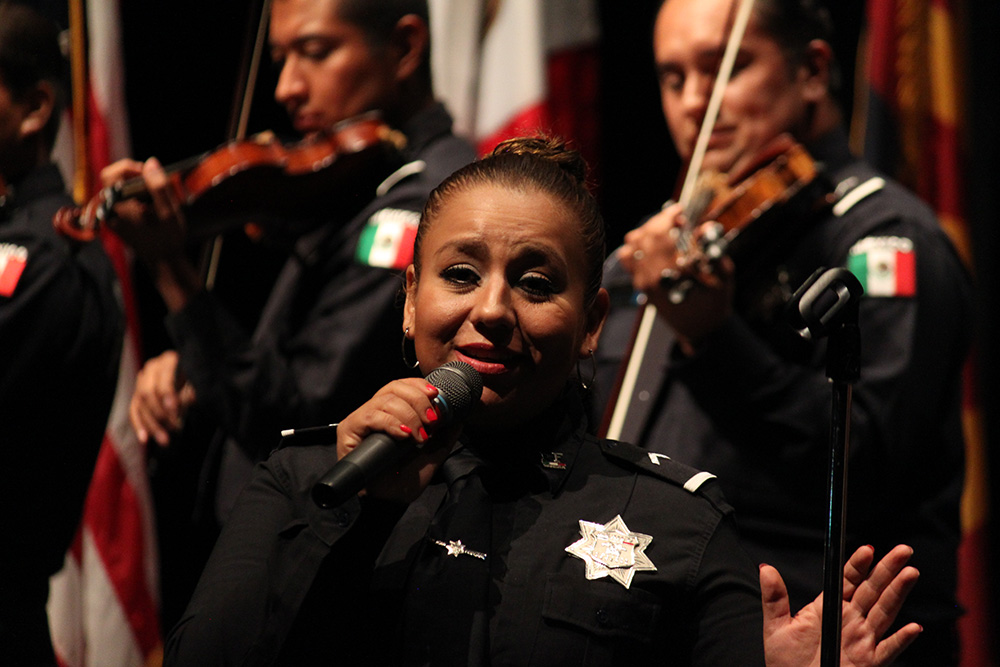 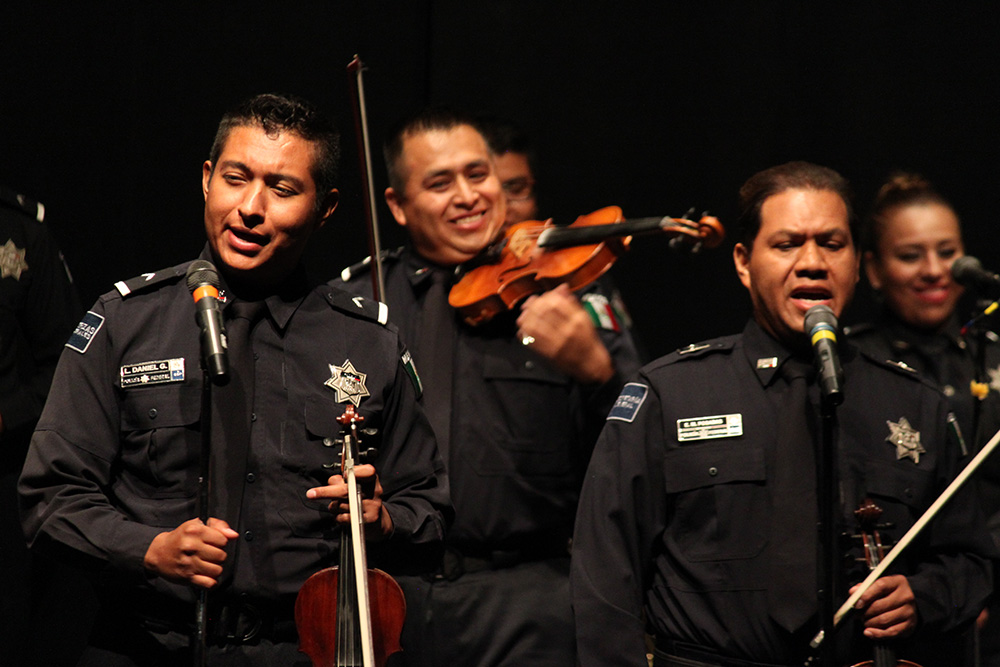 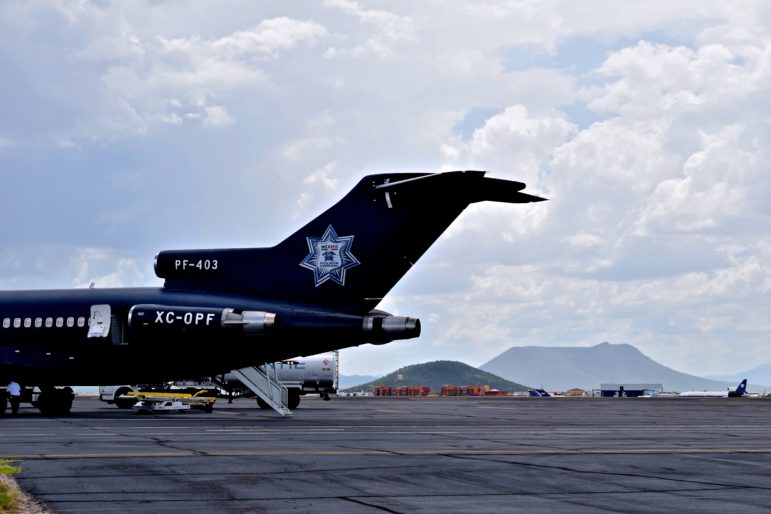