To understand and discuss current proposals and ideas regarding immigration today in the United States and the reform thereof, factual information must be used to argue cases for and against said proposals.

While the effects of both legal and illegal immigration can be studied various ways and the details skewered to represent one point of view or another, it would be more reasonable to evaluate the arguments against immigration.

The most-apparent misconceptions are that all Hispanics are immigrants, they all immigrated illegally, they all are Mexican and they can’t speak English.

The institute also reports the top seven immigration populations living in the United States (as well as their decennial growth since 1980) as being: 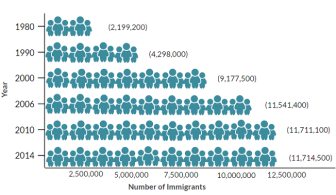 John Lipski also notes in his book Varieties of Spanish in the United States that, according to the 2000 census, Mexican Americans accounted for “nearly 59% of the total Latino population.”

Furthermore, there were 8.1 million illegal immigrants working or looking for work in the United States in 2012, accounting for about 5.1% of the total U.S. work force.

One of the most popular questions regarding immigrants and immigration is “why should I have to press 1 for English?”

To start, there is no official language in the United States.

Second, why should those supporting free enterprise, an open-market economy and freedom of speech expect that businesses would turn away potential customers based on language? Demanding that the federal government regulate aspects of language in the business sector seems contradictory when those same people argue against the regulation of minimum wages, unionizing and workplace regulations and practices.

The other popular rhetoric is “if you come to America, you speak English.”

In 2014, MPI reported that 55 million people in the United States identified as Hispanic and 19.4 million of those (35%) identified as immigrants.

Also, 63.2 million people (21%) reported speaking a language other than English at home, with Spanish being the most popular selection with 62% of those 63.2 million.
But this does not mean that they do not speak English at work or even at home some of the time.

In fact, in 2013 33.2 million Hispanics in the United States spoke English proficiently.

So why are they here?

It is important to note here that Lipski explains how the U.S. government encouraged immigration through the Bracero program, the subsidization or free travel of Puerto Rican jíbaros to work in agriculture fields and granting refugee status to many Cubans throughout the Castro regime (1959-2008) and, specifically, to more than 125,000 Cubans in 1980 alone during the Mariel boatlift.

Today’s reasons for Mexicans immigrating to the United States have to do with work opportunities.

In fact, The World Bank marks the Gross Domestic Product (GPD) of the United States at $17.42 trillion as of 2014.

According to Investopedia, GPD is, in a simplified way, a summary of what all residents either earned or saved.

Or as CNBC explains it, GDP represents the total dollar value of all goods and services produced over a specific time period. In short, it’s “everything produced by people and businesses, including salaries of workers.”

The organization also shows that of the 125.4 million people living in Mexico, 53.2% live in poverty.

This essentially means that any immigrant coming from a country with a lower GDP than the United States (which is every country in the world according to Knoema.com) will experience a higher standard of living.

That December, the Mexican government announced the minimum wage would increase in 2016 to $73.04 Mexican pesos per day, or about $4.27 USD.

That is only about $93.94 USD per month, working five days per week.

In July 2015, the national minimum wage in the United States was increased to $7.25 USD.

That is more than a month’s wages working in Mexico working the minimum daily wage.

To put that into context and how that ties with immigration to the United States, let’s take a look at those states and cities with the highest concentrations of Mexican immigrants and what those hourly wages look like.

In March of 2016, California, which already has one of the highest minimum wages at $10.00 per hour, announced a plan to raise the minimum wage to $15.00 per hour by 2022. According to USA Today, 6.5 million California residents, or 43% of the state’s workforce, are working for minimum wage.

However, Arizona and Texas have no such plan to raise minimum wages to $15.00 per hour, or any other target figure. The minimum wage in Arizona is $8.05 per hour with annual adjustments based on the Cost of Living Index, and Texas is adamantly set at $7.25 per hour.

This is a brief explanation and synopsis of the political climate concerning immigration policy in the United States.

But what do they presidential primary candidates have to offer the America people and immigrants alike regarding immigration policy and reform, amnesty, work and wages?