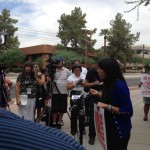 “We’re asking all the families to please prepare in case of these emergencies to know that they have the right to see an attorney, they have a right to a call and of course at every moment it’s so important to have an emergency plan for when things like this happen,” ACLU Arizona Immigrants Rights Project Coordinator Dulce Juarez told reporters at a rally in front of Immigration and Custom Enforcement’s Phoenix field office Monday afternoon.

I’d heard the message before at a school assembly for parents last fall when community organizers gathered parents, pastors, and politicians to discuss how to protect children of undocumented immigrants, sometimes U.S. citizens and sometimes undocumented themselves, in a situation where anything from a workplace raid to a traffic stop for a broken tail light or speeding can throw the family into every kind of limbo with no warning: undocumented immigrants should have emergency plans in place to protect their children and their assets because it may be too late to make arrangements once they’re apprehended.

“We’re asking all the families to please prepare in case of these emergencies to know that they have the right to see an attorney, they have a right to a call and of course at every moment it’s so important to have an emergency plan for when things like this happen,” said Juarez.

This isn’t the story I was assigned to cover – but it’s another side of living here.

Organizers from Puente Arizona and National Day Laborer Organizing Network had gathered protestors to support 30 workers still in detention after federal agents raided 16 Danny’s Family Car Wash locations in Phoenix on Saturday morning to make arrests in a criminal identity theft investigation and also detained 223 people, most of whom were quickly released, on immigration status checks.

The indictment for federal case cr-13-1143-PHX-NVW, unsealed Monday afternoon, shed more light on the two year investigation and the raid’s targets at Danny’s Family Car Wash and the staffing-services provider they used, HR Betty. The victims may include former car wash employees who told reporters that they’re among the victims whose lives were disrupted when their identities were stolen and used by others and those facing criminal charges in the case are managers and supervisors rather than workers.

Immigrant advocates say that regardless of its official purpose the raid’s effect on the community isn’t that different from immigration raids carried out by Maricopa County Sheriff Joe Arpaio.

Natally Cruz, whose work for Puente includes working with families of people who’ve been detained on immigration offenses, was at one of the raided locations.

“To me it was heartbreaking, I couldn’t believe it, I was hoping it was just a rumor, that it wasn’t happening,” Cruz said. “I jumped into my car right away and I went to the nearest car wash and as soon as I saw it pretty much just covered by ICE agents, there was about 50 to 60 of them at one carwash.”

Some of the workers managed to text family members who also rushed to the scene and ended up watching their loved ones be loaded on buses for transport to processing.

The scene also made Cruz think of her uncle, who was taken into custody during a raid about six months ago.

“It was heartbreaking and it reminded me of how my cousins suffered when their father was detained,” Cruz said. “Just seeing the 31 people being put on the bus, it was like, 30 families had been separated and 30 kids are going to be crying or more for their mother, their father, they don’t know when they’re going to see them.”

This summer the immigrant community felt safer when when federal Judge Murray Snow ruled in May that “the office of America’s self-proclaimed toughest sheriff systematically singled out Latinos in its trademark immigration patrols” and thereby “violated the constitutional rights of Latinos by targeting them during raids and traffic stops.” Murray Snow later assigned monitors to the MCSO to monitor the decision’s enforcement and many thought the immigration raids had come to an end.

Arpaio soon proved them wrong by carrying out raids at two locations of Uncle Sam’s, a local restaurant chain in July and at a commercial cleaning service, Pro-Serv in early August. The raids were the 73rd and 74th since they began in 2008; over 500 workers have been arrested and three employers sanctioned.

While Saturday’s federal raid targeted employers, Cruz said and that the community doesn’t see a difference when the visuals – officers in ski masks and detainees in work uniforms with hands handcuffed or zip tied behind their backs being loaded on idling black buses – are the same.

“The fears are very similar with the community,” Cruz said. “People are afraid to come out.”

If the undocumented workers without criminal histories are deported, the outcome for their families may be the same too.

Most of the workers detained in Saturday’s raid were released by midday Sunday. About 30, like Juan Carlos Espinoza Raynosa, were transferred to Eloy or Florence and advocates say that whether they’re still in detention or now, all are facing deportation proceedings.

Raynosa’s wife, Laura Torres, said that he rode his bike to his job at the car wash for almost nine years and was working at the Scottsdale location during the raid. 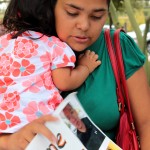 Laura Torres holds her daughter as she speaks to reporters at an immigration rally. – 19 August 2013

Torres had just made lunch for her two children, 3-year-old Joan and 10-month-old Josefina, who are both U.S. citizens.

“He called me because he had been caught by immigration at the car wash place,” Torres said.

Raynosa had been deported twice about 10 years ago but had no criminal record. Now he was resisting signing a voluntary departure, Torres said, though he also told her than an immigration judge had already signed his deportation order.

While the family who always ate dinner together waits for information, the children are confused at meal times and having trouble sleeping.

“My children are crying every night for their father and I don’t know how to explain to them what’s happening,” said Torres. “Why did they do this horrible thing to us?”

For families like Raynosa and Torres’s, there are also practical implications to being in limbo. Torres takes care of the children and Juan is the family’s breadwinner so she, like the other families with workers in detention or out of a job from the raids, is uncertain how they will get by when the paychecks stop.

“All I’m asking is that he is able to get out of detention,” Torres said. “The whole family is waiting for him.”

Then there are the cases where children are left without either parent. 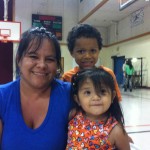 Both of Katherine Figueroa’s parents were working at the same Peoria car wash when it was raided in October 2009. Katherine, 9-years-old at the time, made a personal plea to President Barrack Obama for her parents’ release. Without her aunt and uncle stepping in, Figueroa’s custody would have been in limbo as well as her daily life. Advocates say that some immigrant parents often find themselves fighting to keep their children as well as avoid deportation – and sometimes losing both battles.

It’s exactly that situation that organizers are trying to prevent by reaching out consistently to the community at every chance. Whether at the meeting for elementary school parents last fall or Monday’s rally, Juarez’s plea for perspiration is consistent.

“We understand that this is the reality that we live in,” Juarez said. “We don’t want to live in this reality, we want things to change but it’s important to become educated and to know what your rights are.” 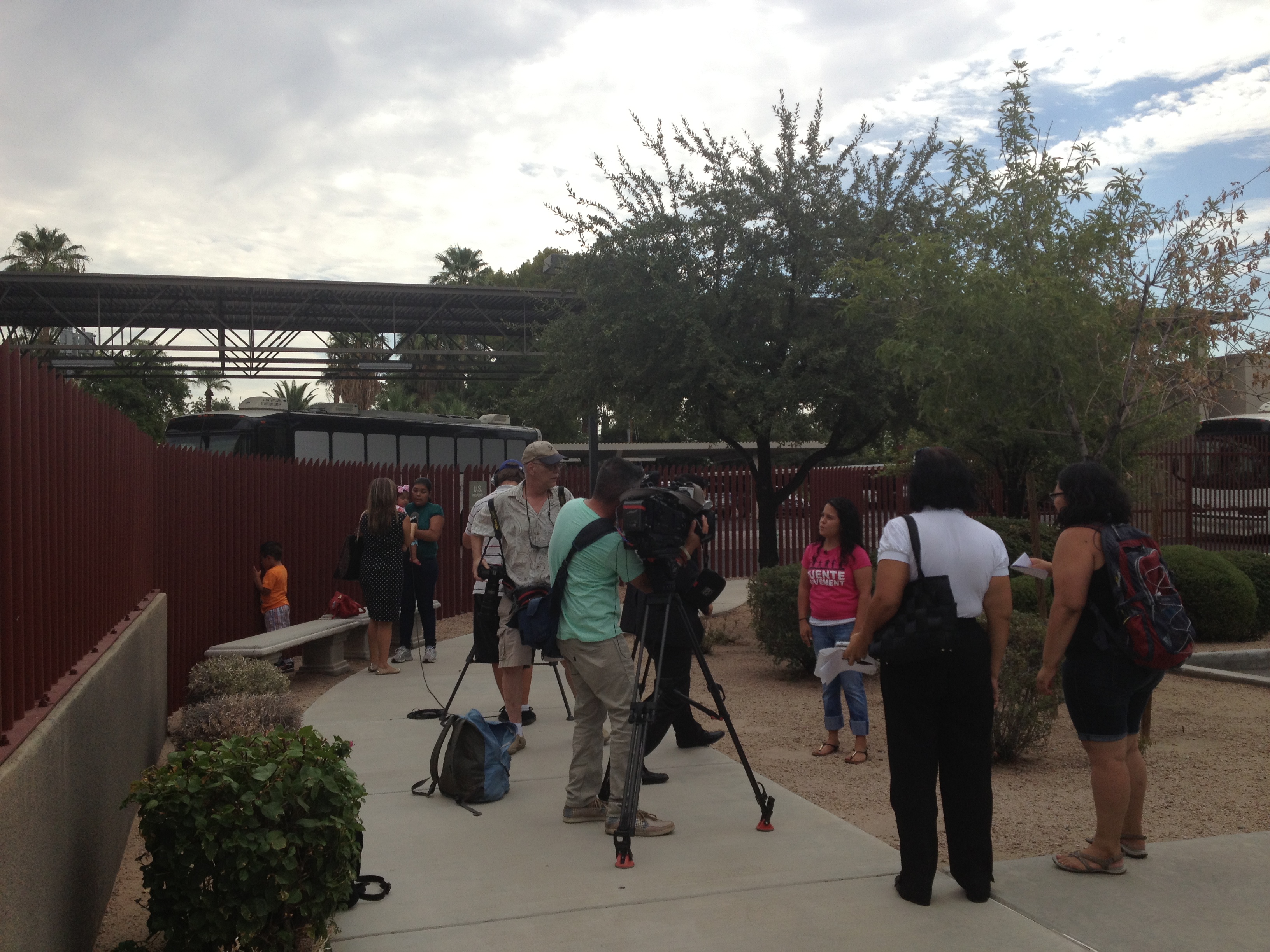 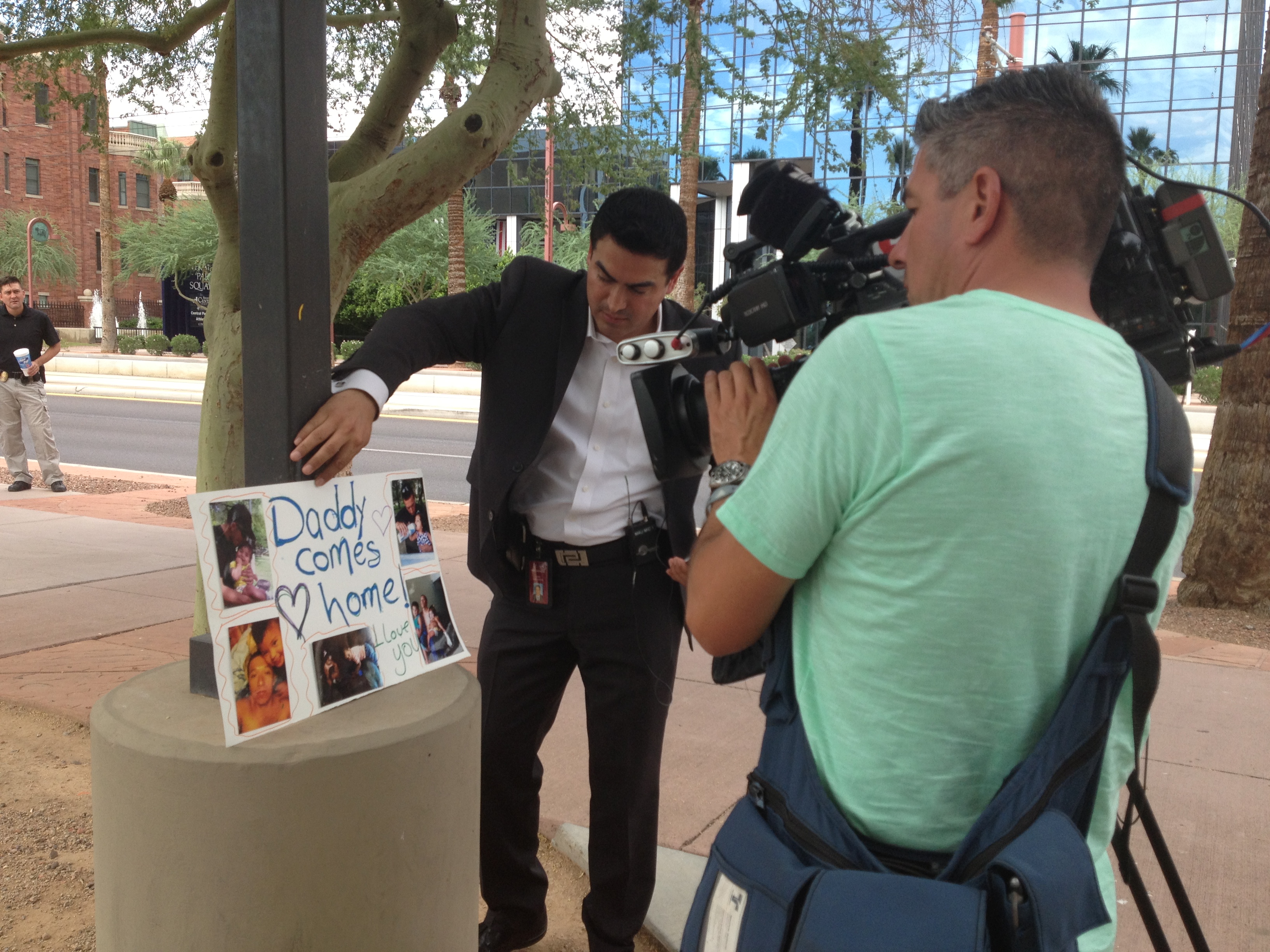 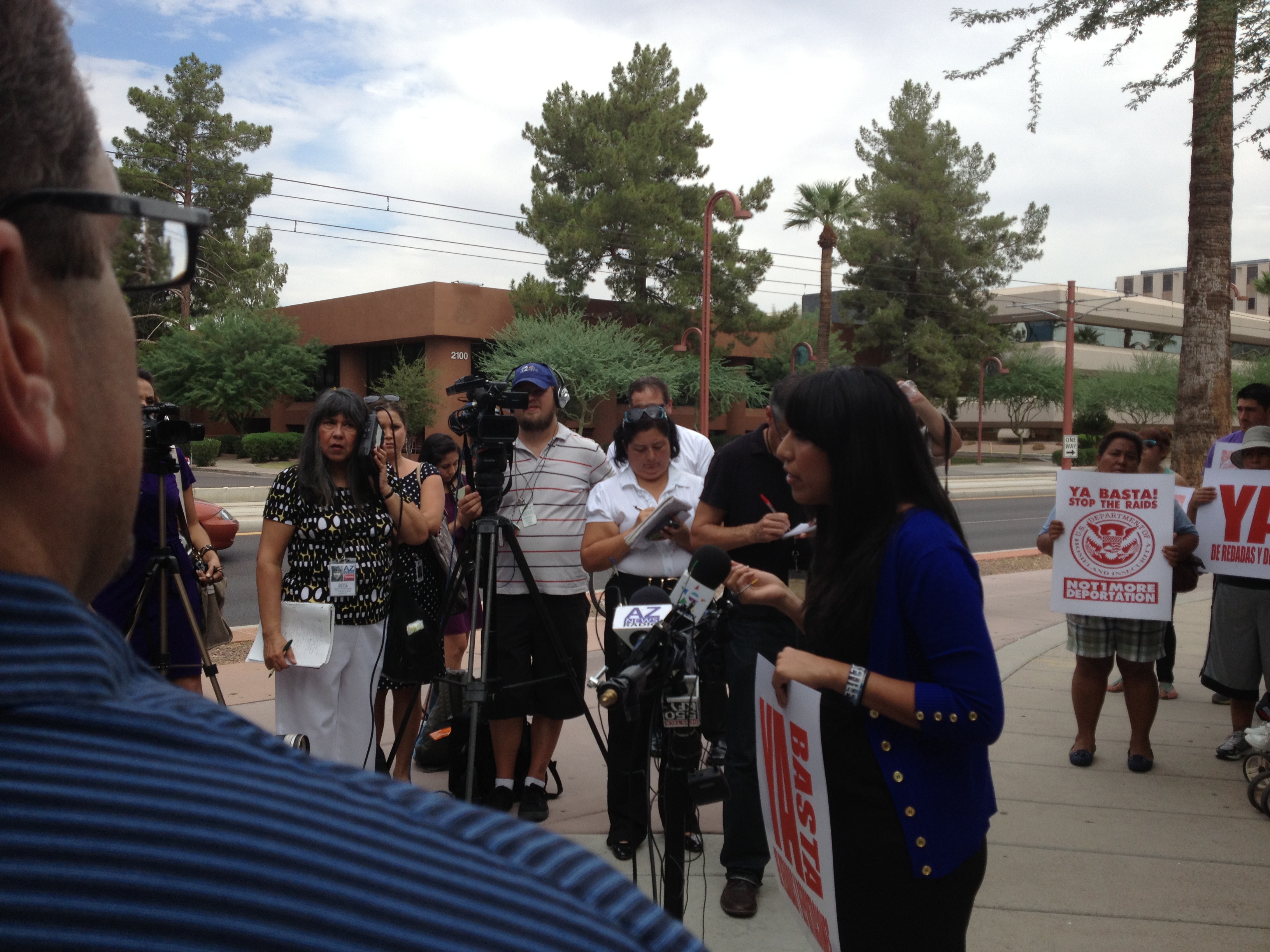 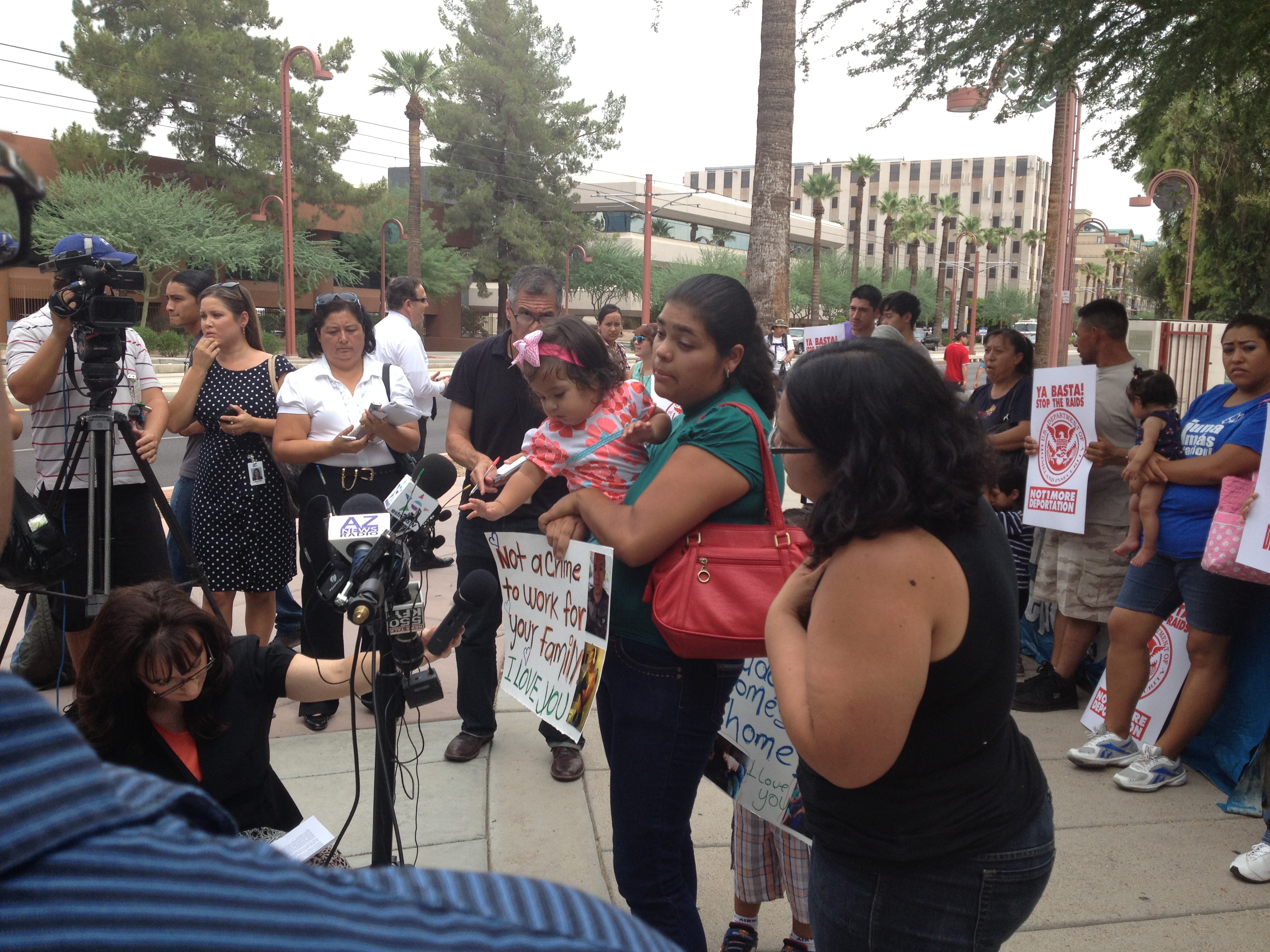 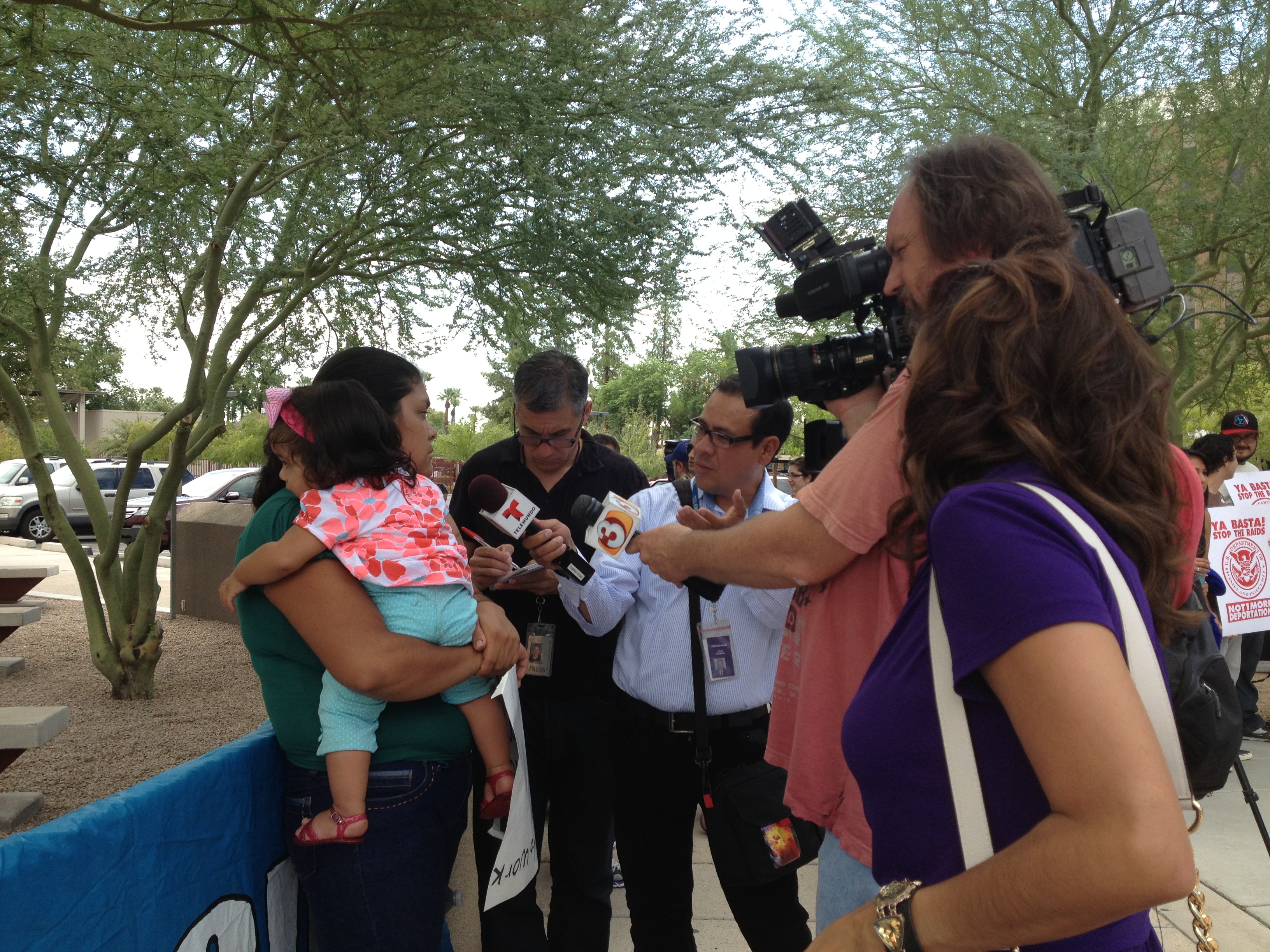 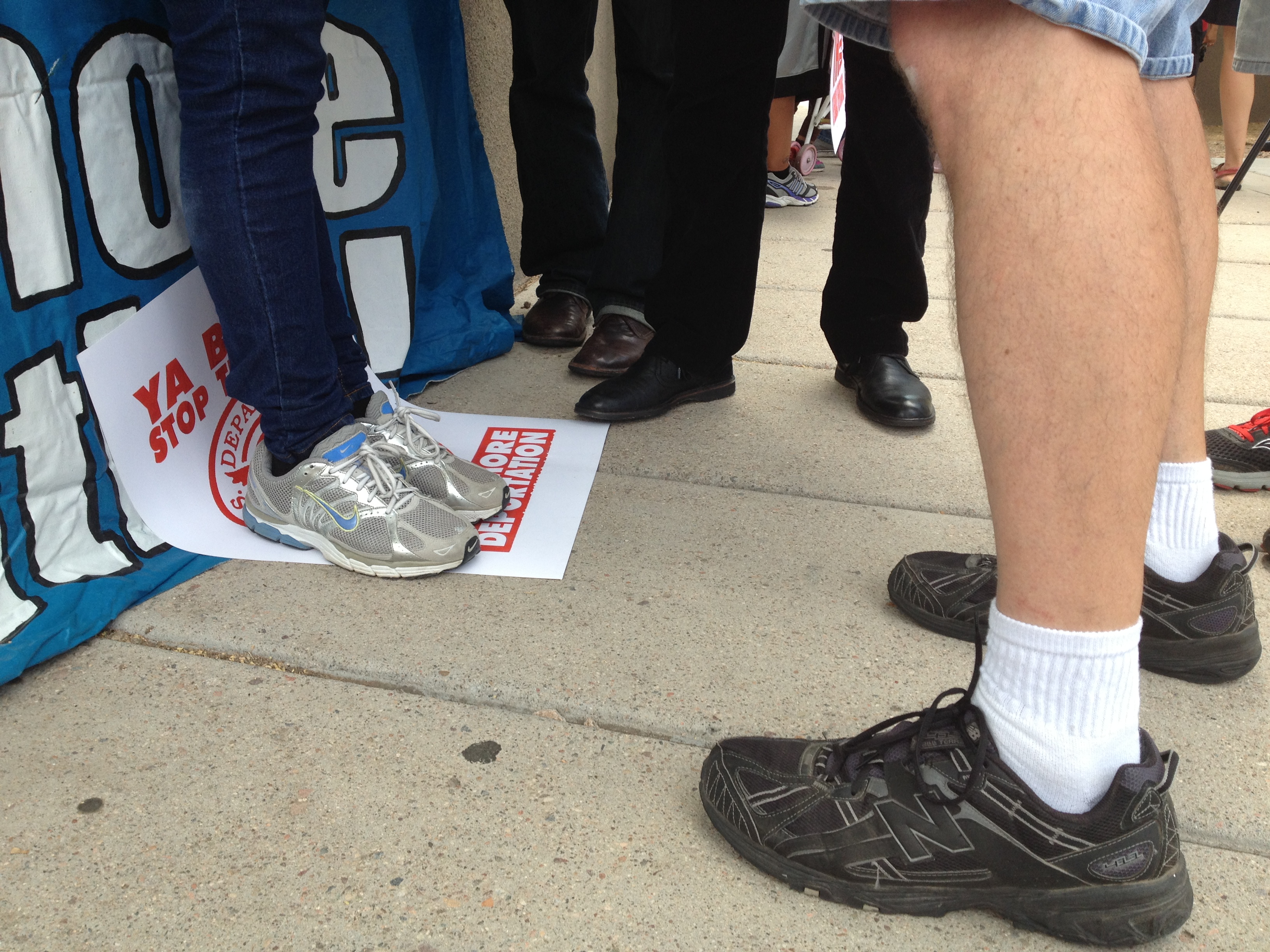 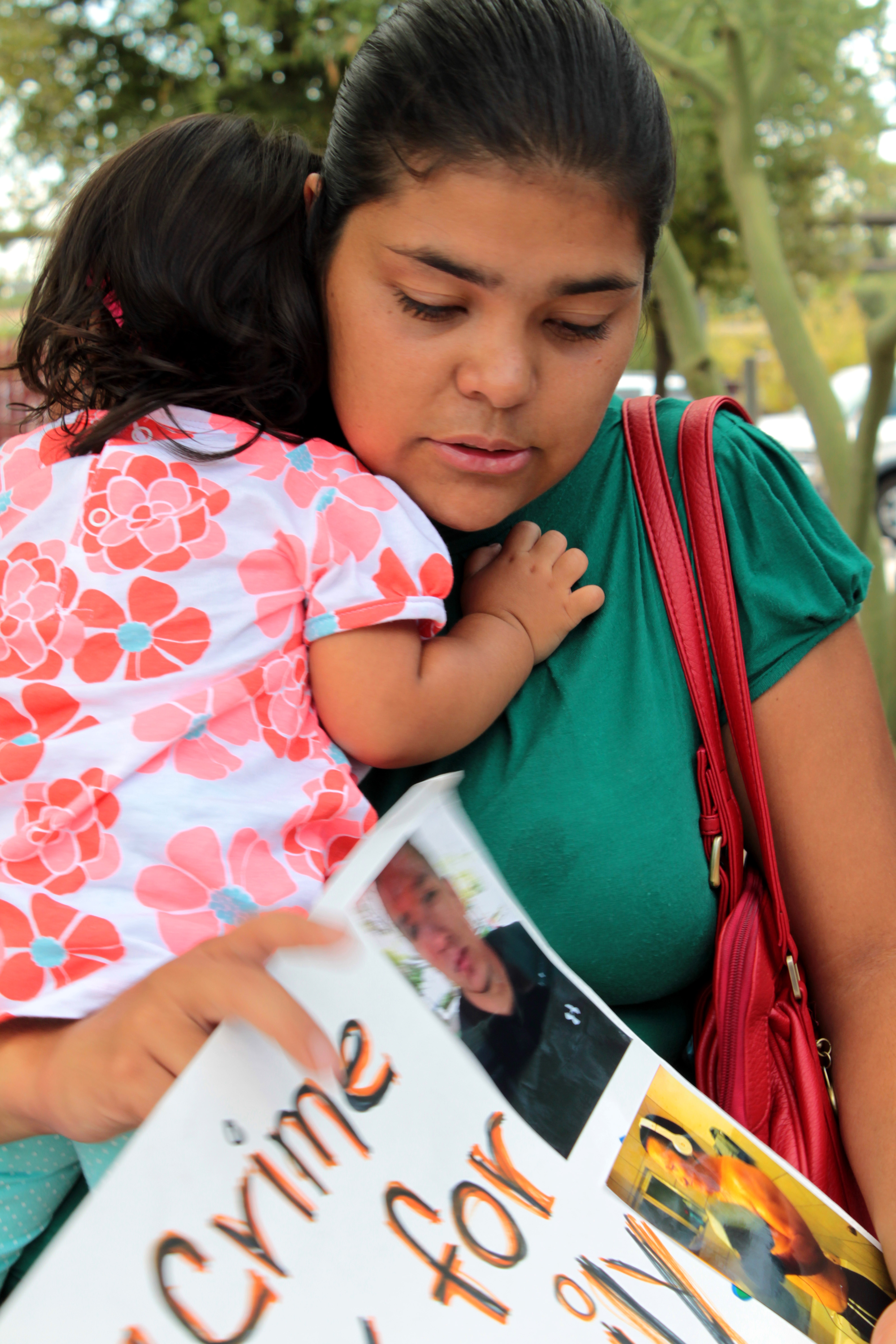 Laura Torres holds her daughter as she speaks to reporters at an immigration rally. - 19 August 2013 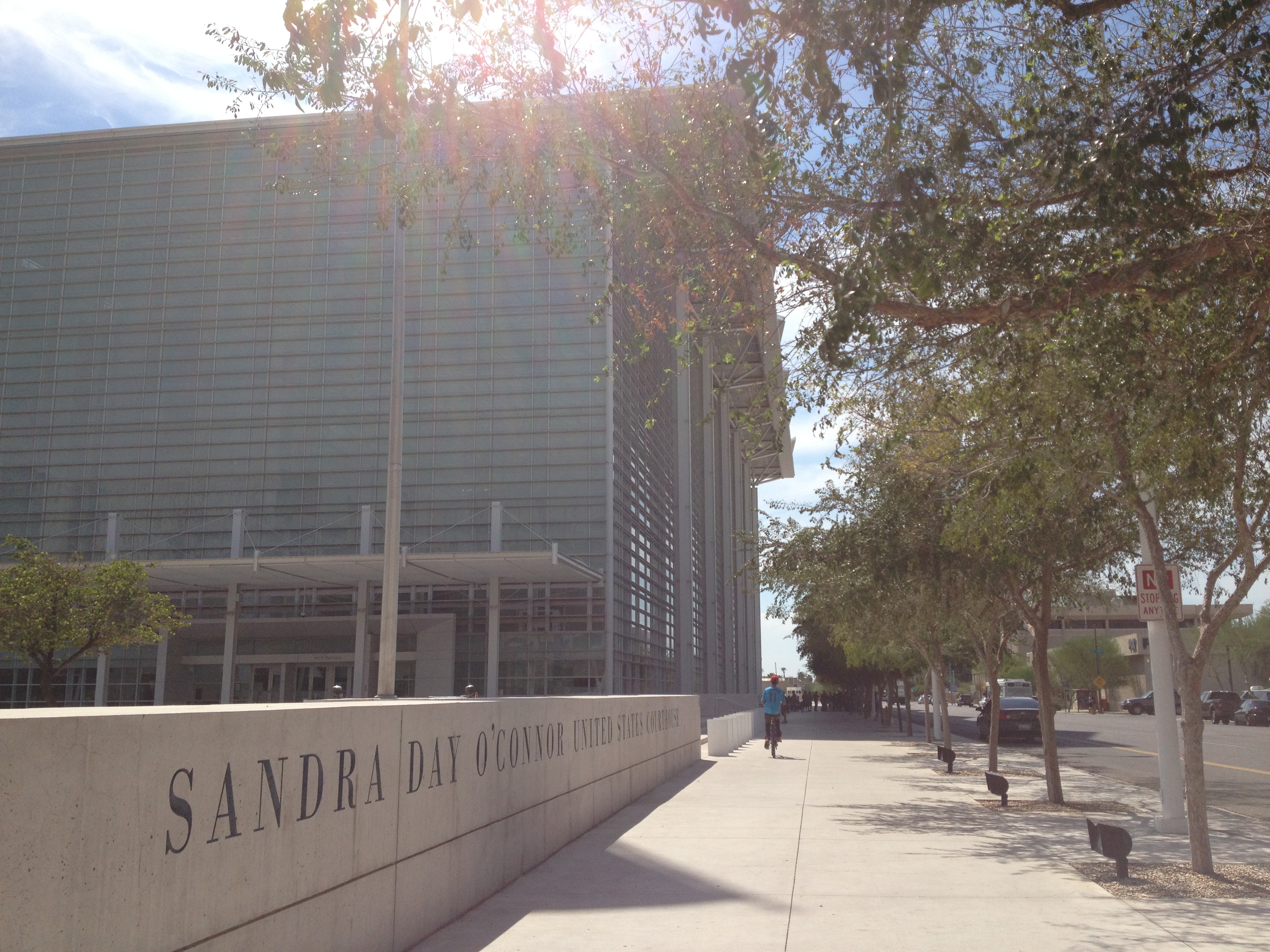 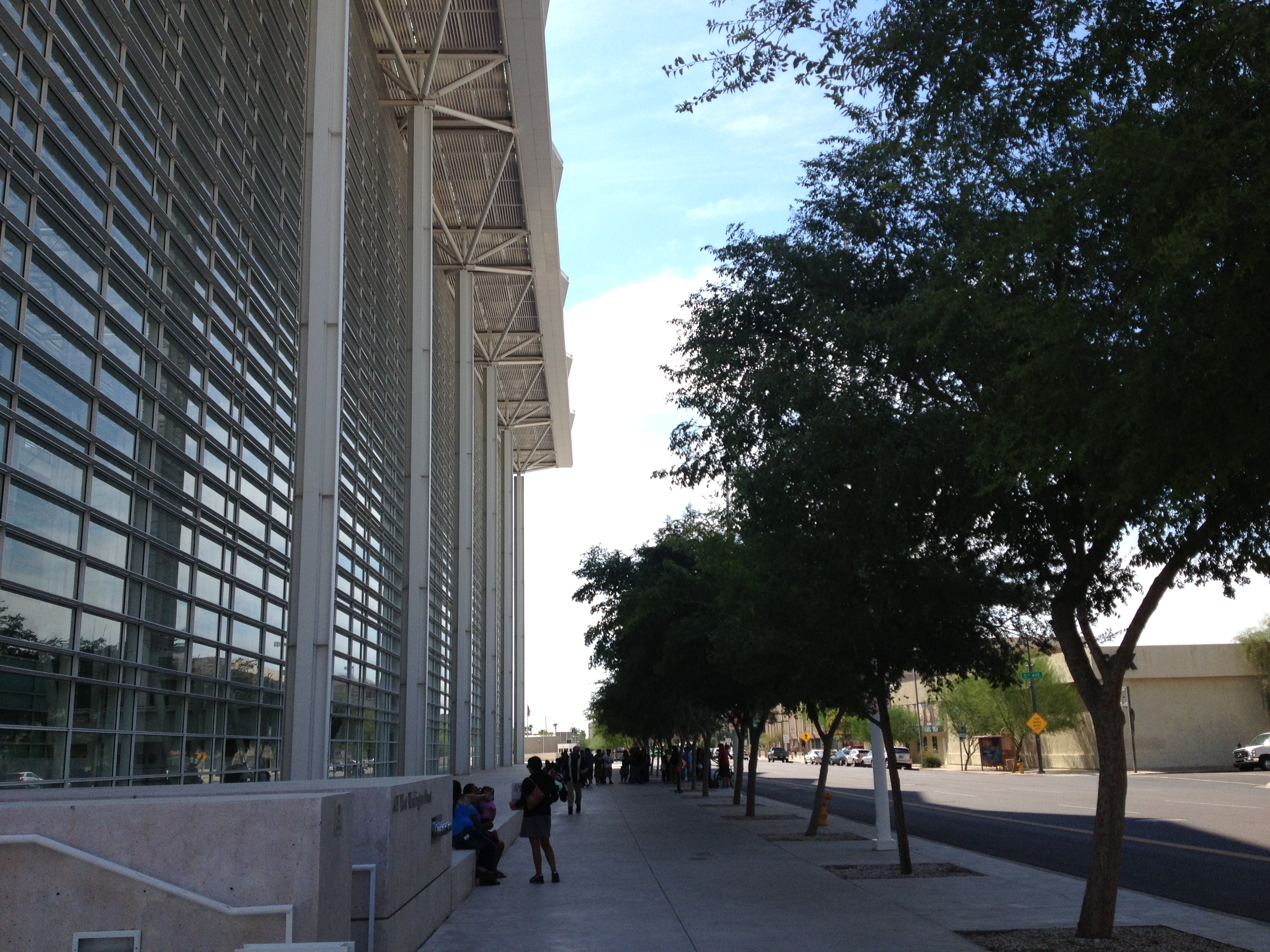