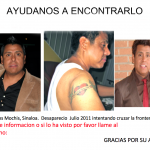 In February, Eddie hadn’t heard much from Robbie and Johnny about their search along the Mexican side of U.S.-Mexico border for Andy, missing since July 2011.

Yesterday he called back to update me on their trip.

“They came back empty handed with no information, they asked people and they didn’t have anything,” Eddie said. “They reported that the Mexican police, they looked around and nobody had any information.”

But he had something more pressing to discuss.

“That’s some breaking news that the medical examiner called from Arizona, they have some information that they called the dentist,” Eddie said. “The dentist called us and talked to my wife.” 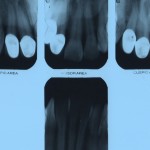 Eddie had gathered the originals of Andy’s dental records to add to the missing persons report. He had brought a copy when he came to Arizona in September 2011 and also sent me a copy the next summer in case he thought of more places to give copies to or anyone else here asked for it.

“The dentist received a call for medical records for Andreas, for dental records,” Eddie said. “We want to find out what they want so we can drop of the dental records at the medical office.”

Eddie was going to call the dentist and clarify which medical office was calling. If it was one in Arizona, he asked, could I get them the copies he had sent me?
He called back later in the afternoon to say that it was the office in Tucson, The Pima County Office of the Medical Examiner-Forensic Science Center. The contact names the dentist had given him were Bruce Anderson and Robin Reineke. The PCOME and the contact names were all familiar from working on the story which Eddie later discovered.

Eddie asked me to call them that afternoon or the next morning if they had already closed and see if they preferred to receive the records by mail or delivered in person. They were closed, so we made plans to talk the next day when I found out more.

I asked him how he was doing.

“We’re doing fine, we’re just worried a little bit,” Eddie said. “All of the sudden we have this call, well, there must be something going on that they contacted the dentist.”